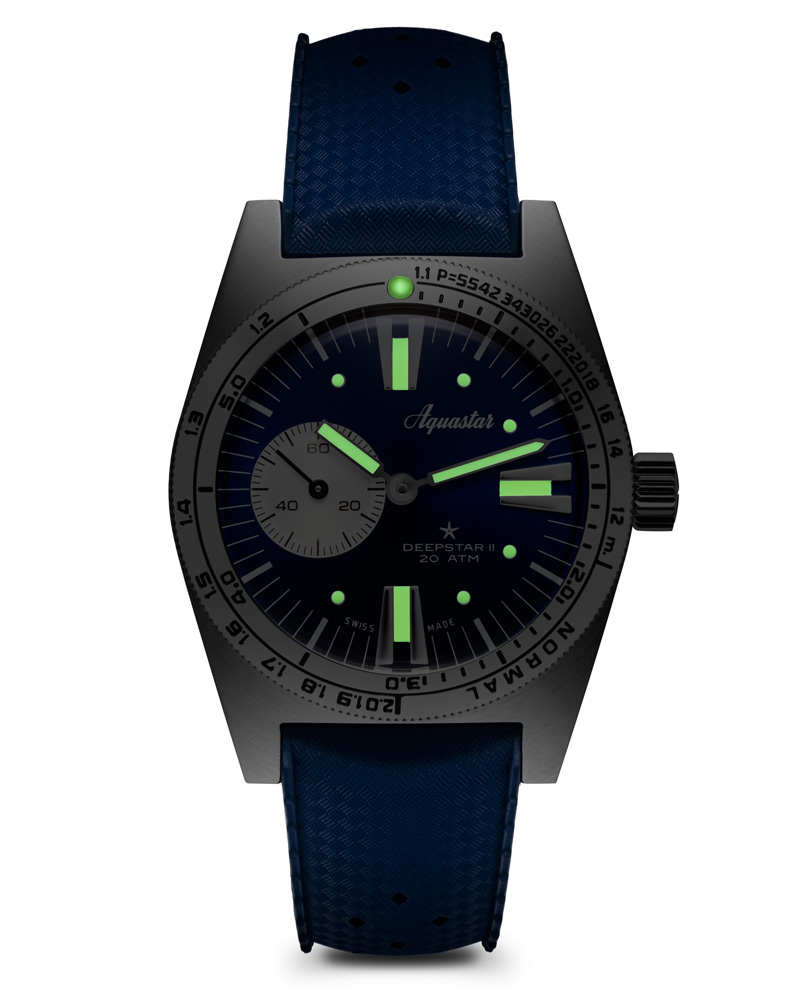 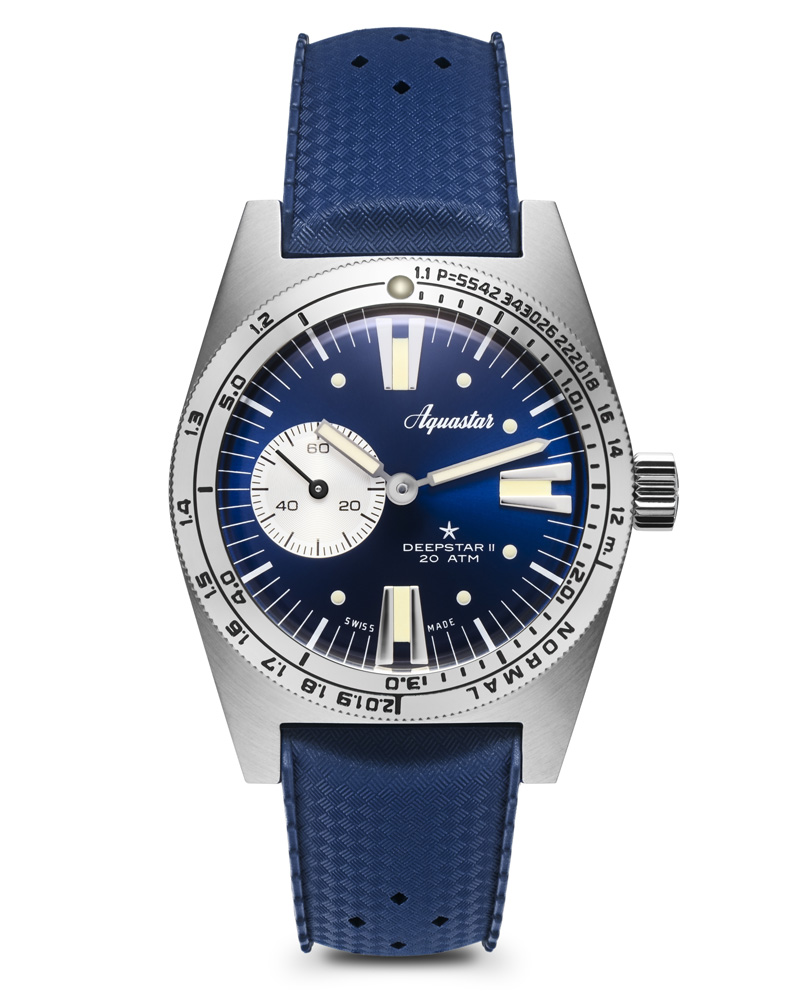 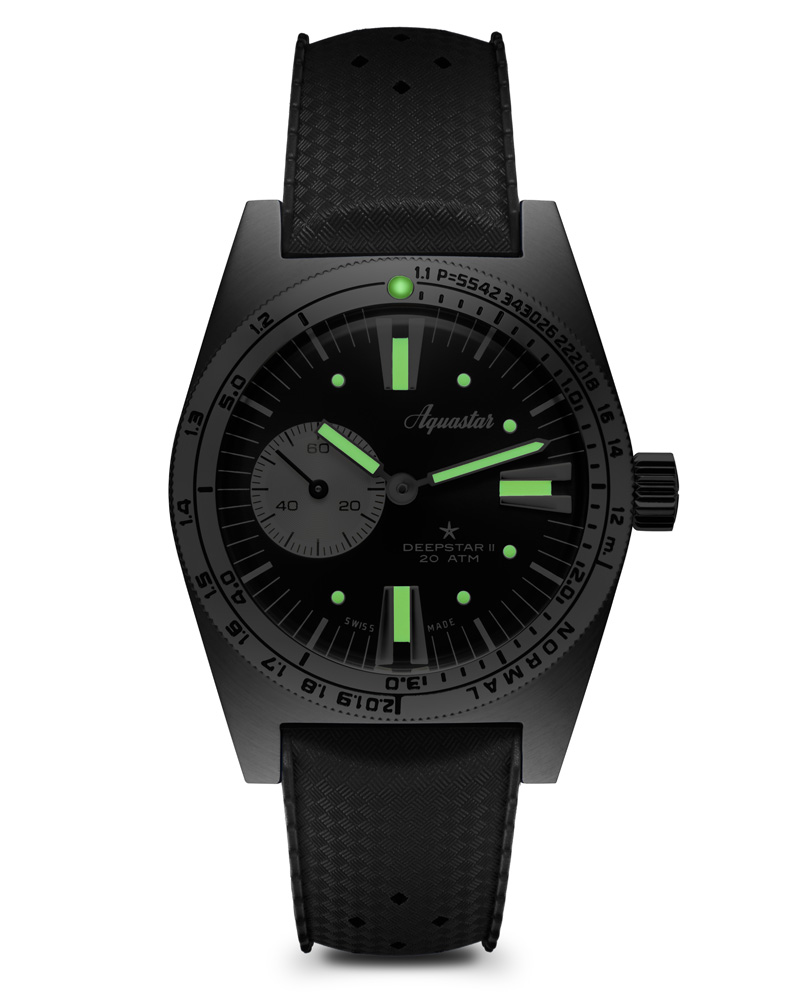 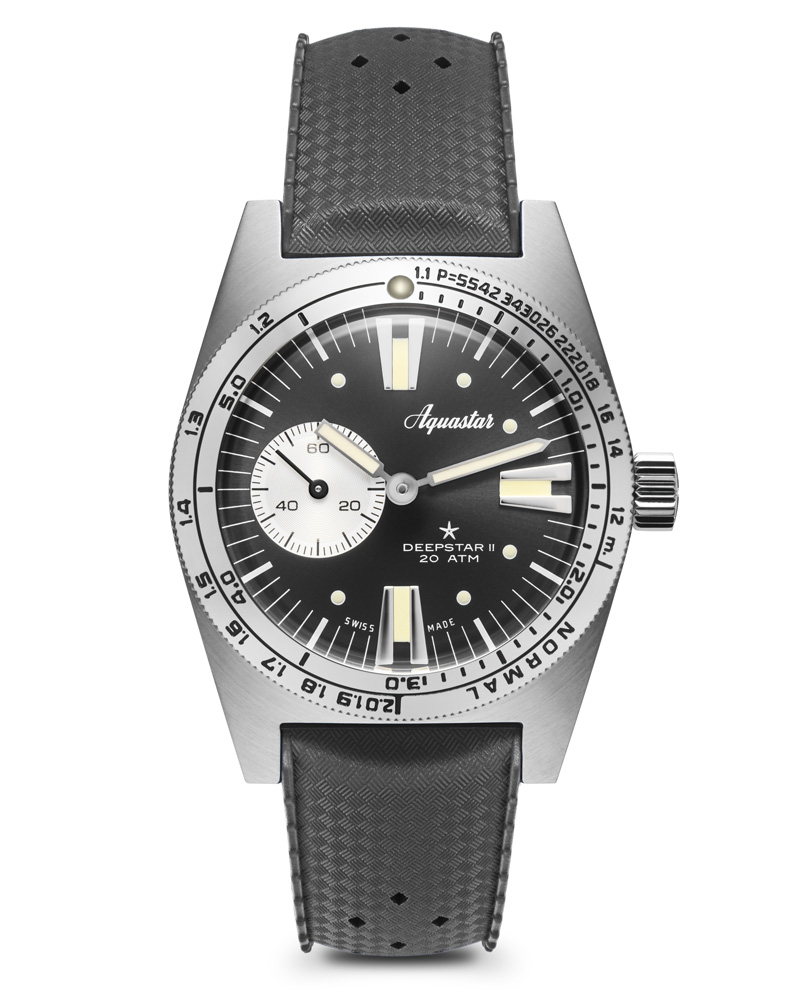 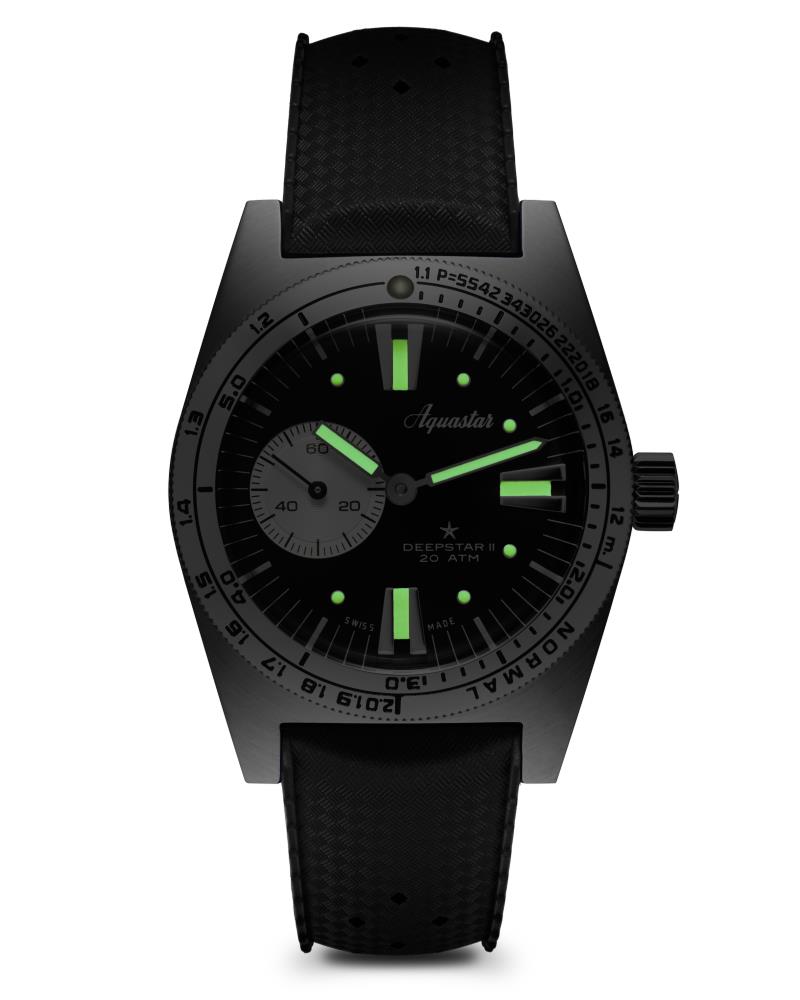 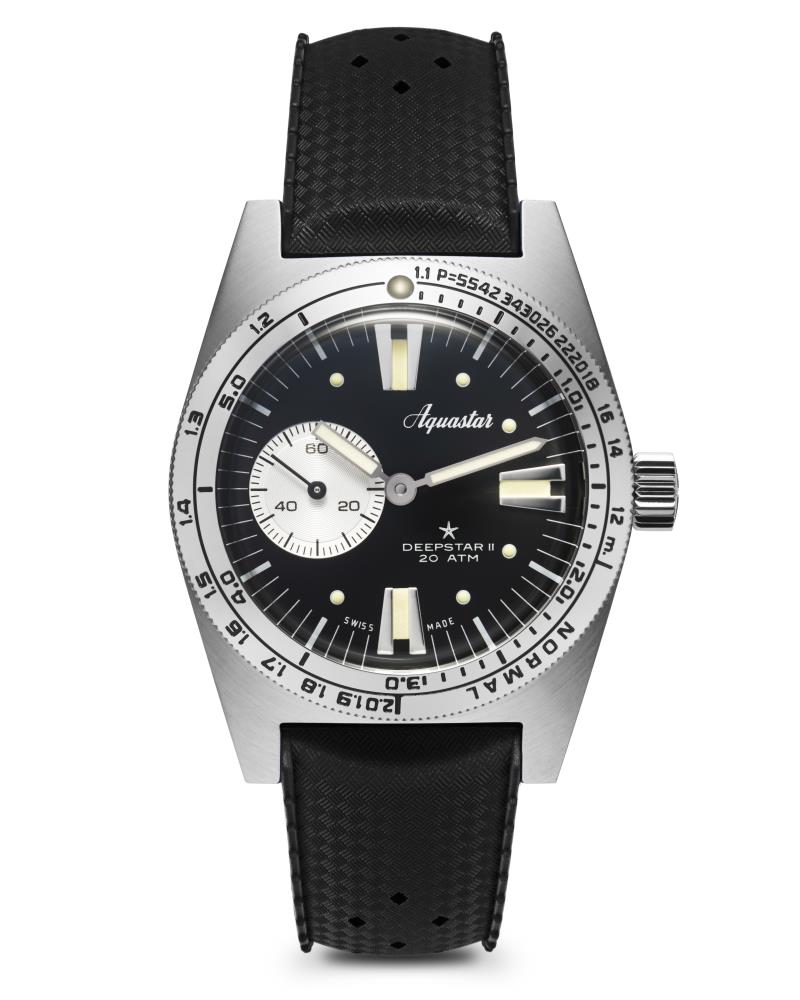 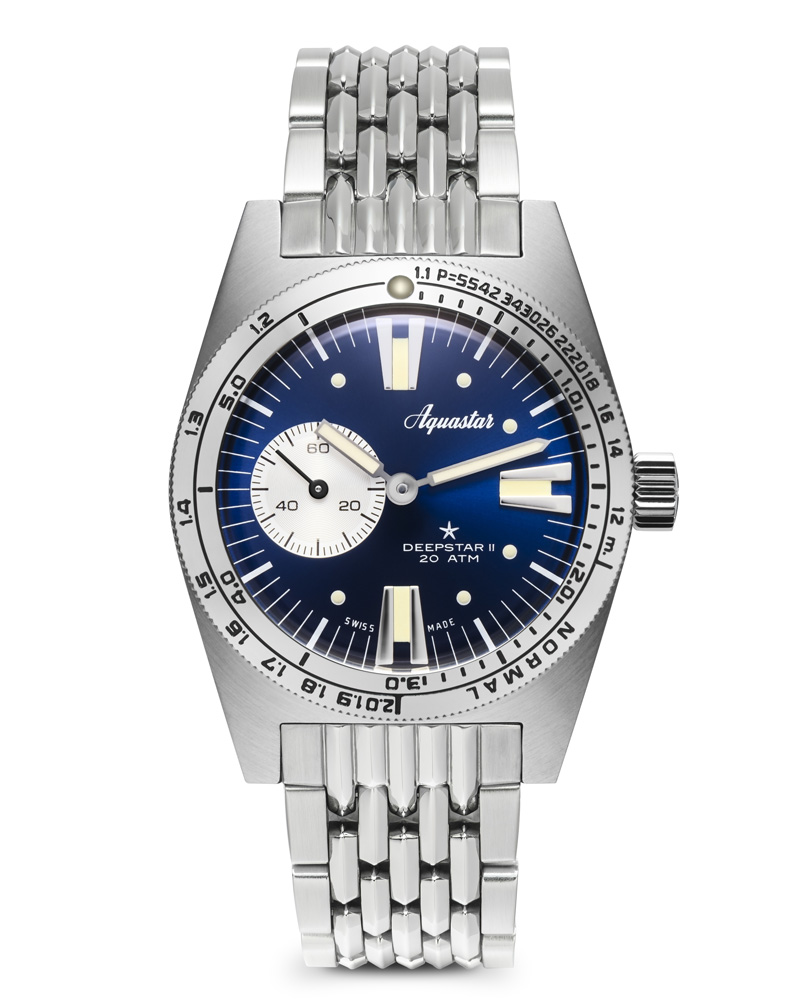 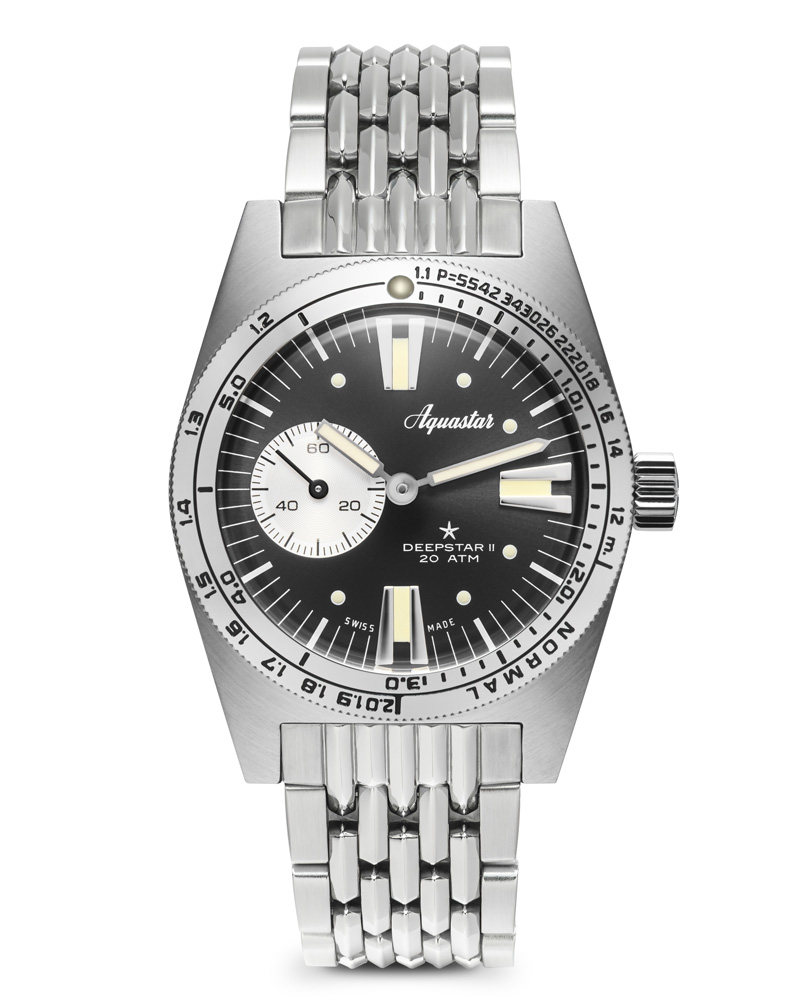 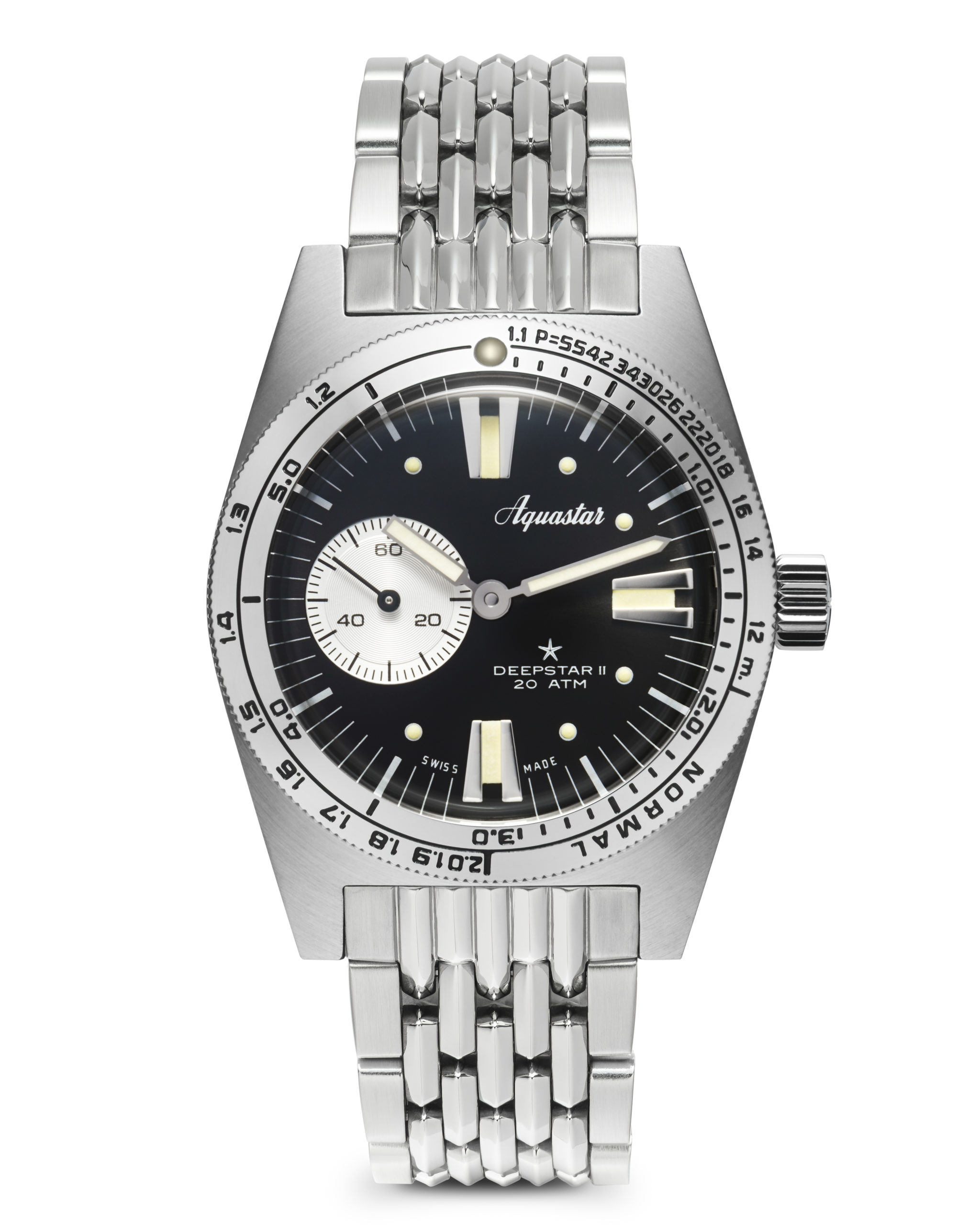 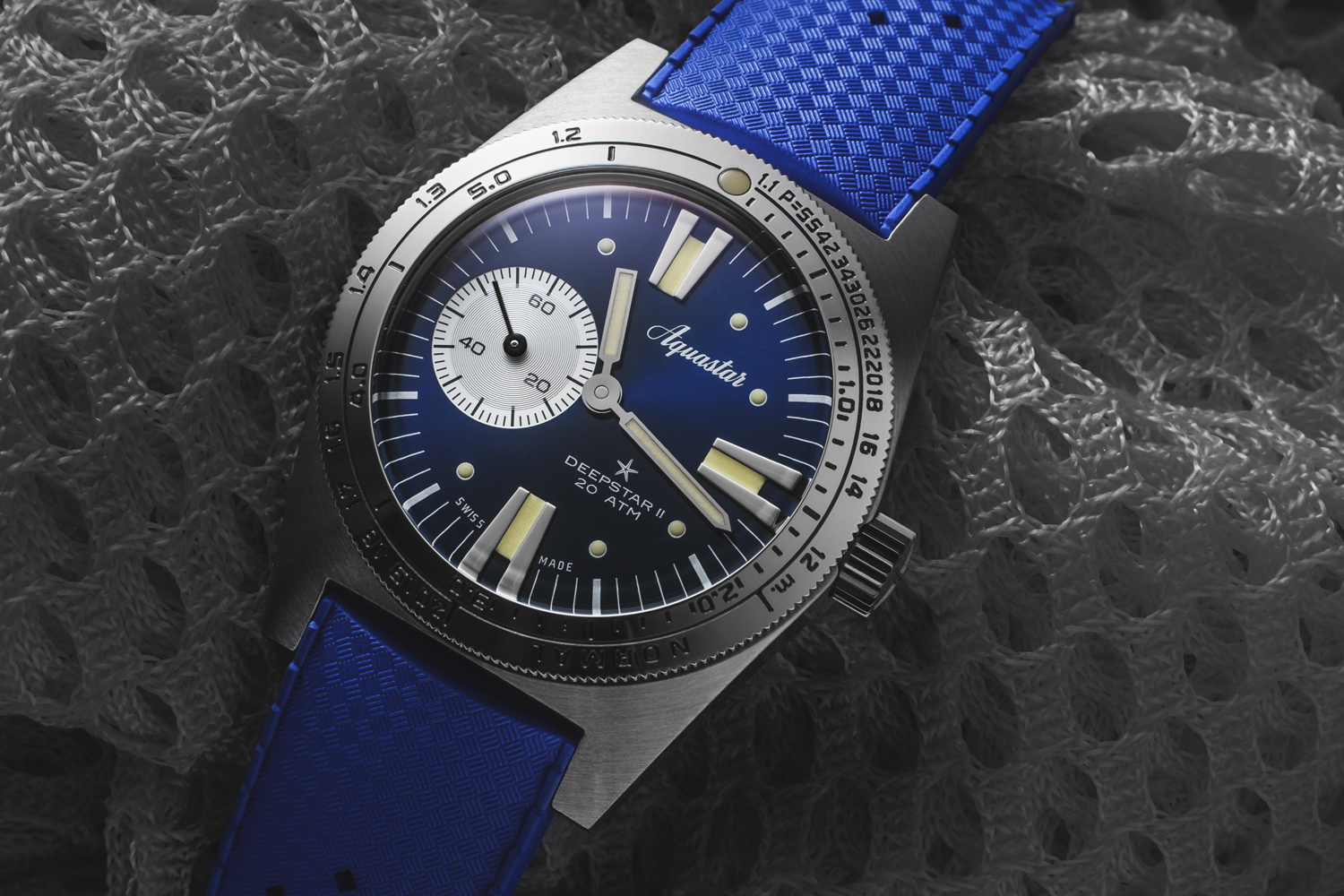 THIS IS NOT ANOTHER RE-EDITION

On the heels of reviving the last great untold story in dive watches, Aquastar presents  the Deepstar II – the spiritual successor to 2020’s critically-acclaimed Deepstar Chronograph Re-Edition. This charming new three-handed 37mm dive watch aims to pick up where the Aquastar of the 1960s left off, paying tribute to diving’s earliest explorers and aquanauts, their groundbreaking missions, and the innovative dive watches that they wore. 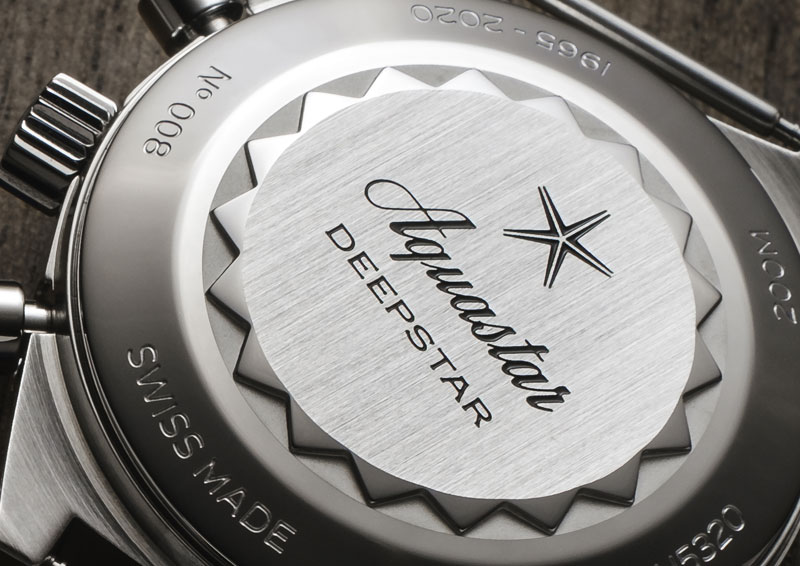 shares the exact same dimensions with the 1963 Deepstar, 37mm diameter and 46mm length from lug to lug. The radial finishing of its Blue Ray, Steel Grey, or Vintage Black dial, the polished applied markers, the oversized 30-seconds counter, and of course, its dual scale rotating bezel. Inside ticks a Swiss Made SW290 caliber. The watch comes in 2 variations, the first fitted on a newly developed seat belt fabric NATO strap in the matching color. The second variation is fitted  on a stainless steel BOR bracelet with a dive extension and dive clasp. 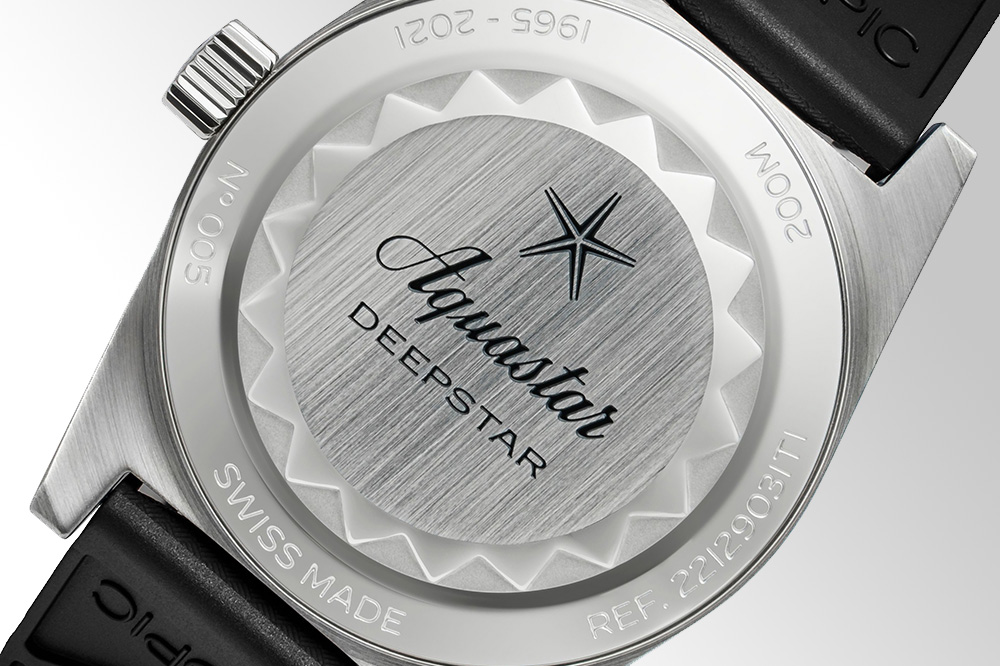 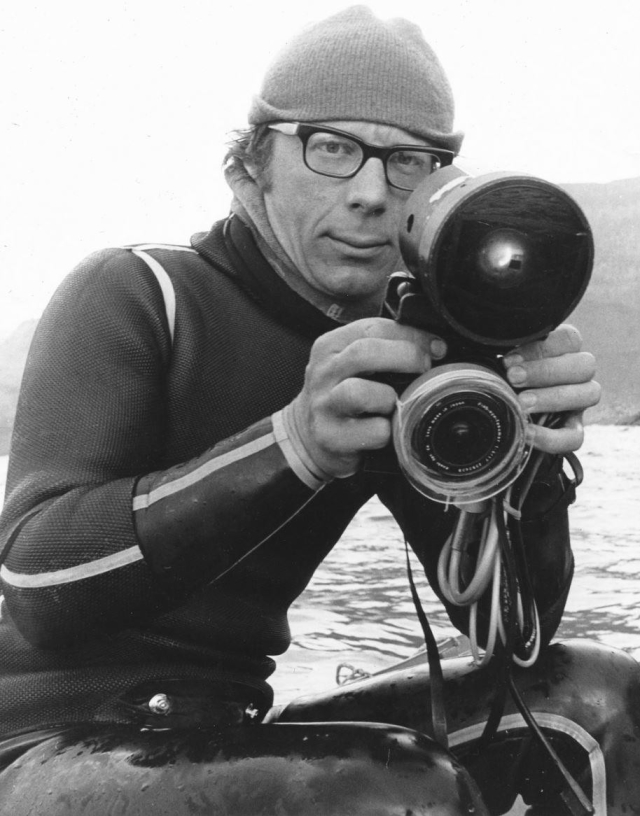 The man behind the invention of the Deepstar was head of R&D at Aquastar Geneve S.A. between 1964-1967. He was born in Brussels, Belgium in 1933 and since has been engaged in the dive industry and has remained until today. Marc was a pioneer of scuba since he started in 1958.

The highlights of Marc’s amazing milestones in the dive world:

Currently, Marc is still teaching the methods of  underwater archaeology as Tutor (instructor)  of the British Nautical Archaeological Society  NAS

Aquastar was founded in 1962 in the city of Geneva in Switzerland by Mr. Frédéric Robert.  Mr. Robert, a diver, a sailor, a pilot, a watchmaker, a mathematician. He also represented Switzerland at the 1948 yachting world championship.

With extensive experience on the high seas, Robert set out to start a watch company that focused on developing watches, watch parts, and specialized instruments exclusively for underwater activities, ranging from sport diving to professional scientific excursions and underwater exploration, with the ultimate goal of making all diving exploits safer. It was November 1962 when Robert renamed his father’s company JeanRichard™ to “Aquastar,” and it was here, where an entirely new underwater legacy was born.

Aquastar marked the first time in the Swiss watchmaking world where a company was dedicated to producing professional-grade watches and timing instruments in a single market segment. And with a catalog that quickly grew to introduce dive watches and other aquatic tools like dive compasses, depth gauges, and thermometers – all of which could be fitted onto watch straps, The path Aquastar has taken was soon to became a unique mission at the time for a Swiss horology Maison.

It was during this time that Mr. F. Robert distributed his range of diving instruments under the new name “Aquastar” almost exclusively through specialized stores instead of regular retailers. Given the socioeconomic environment of the times, this non-traditional sales tactic seemed risky at first, but it reflected Robert’s innovative approach to problem solving – a trait that would reflect in his many patented designs, as well as the backbone that would define the brand’s unique legacy many years later.

In the picture below you see one of the first timepieces created by F. Robert in 1958, a water-resistant watch with a stop watch function, the “AQUASTART” 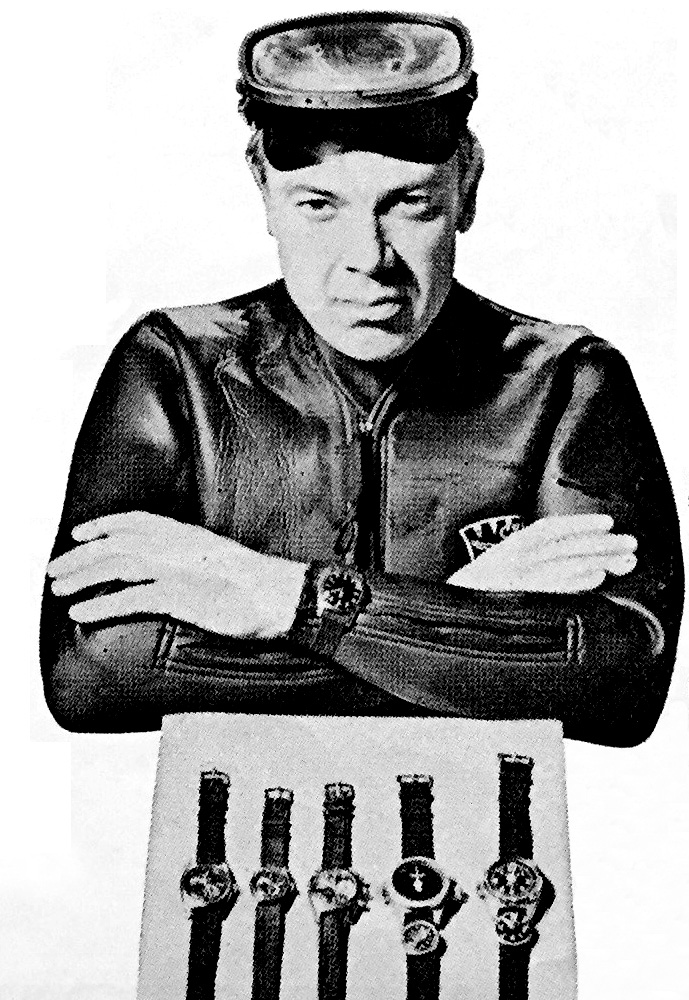 Vintage Aquastart by “Jean Richard” from 1962

AS Deepstar II FEATURED IN

AS Deepstar I FEATURED IN